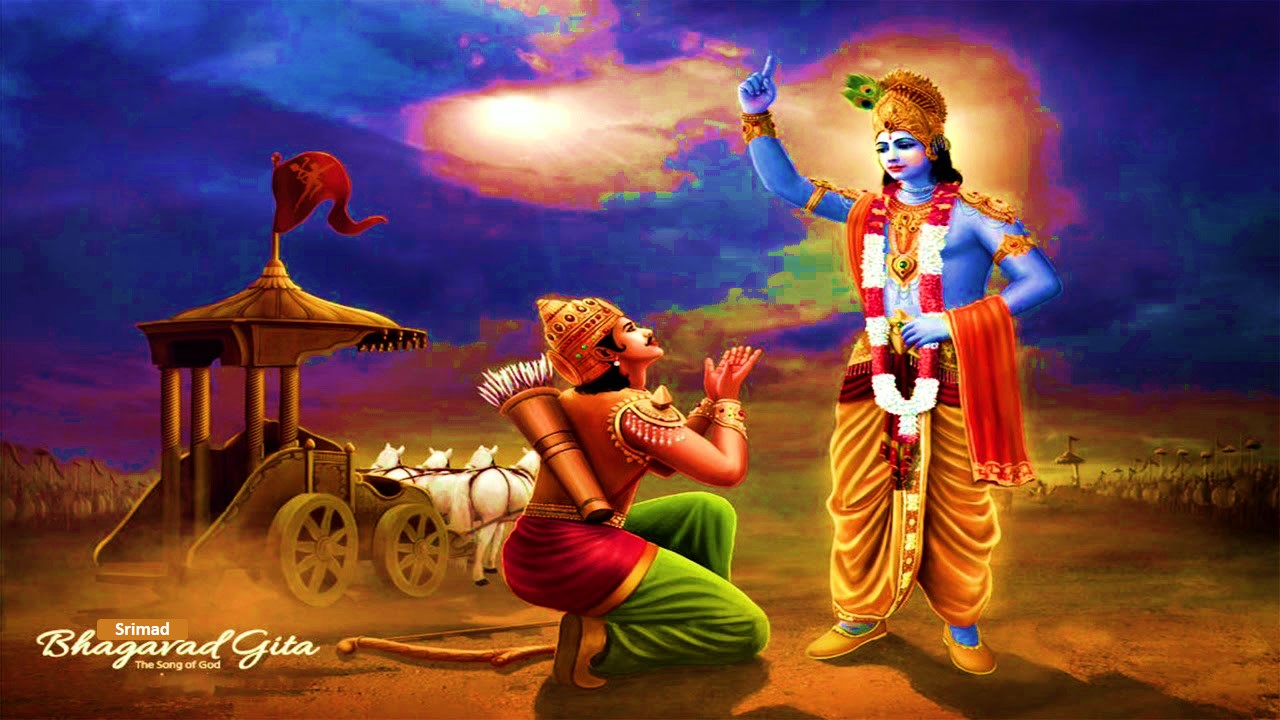 Ramanand Sagar ji narrates about Shri Krishna ji’s Leela. Sutji narrates the story of King Parikshit to all the sages. In which King Parikshit was roaming in a forest where he meets Kaliyuga and he tells the king about his arrival. King Parikshit agrees to come to his kingdom in Kaliyuga. King Parikshit orders Kaliyuga to live in 5 places, one of which was gold. Kaliyuga sits in the golden crown of King Parikshit. On that day, when King Parikshit was wandering for hunting, the sage reached Shamik’s ashram, when he reached, the sage was absorbed in meditation, the king asks him for water but due to being absorbed in samadhi, he does not give any answer. Then Kaliyuga instigates King Parikshit to give death sentence to the sage for disobeying his orders, but the king restrains himself but puts a dead snake around the sage’s neck and he leaves. When Shringi, the son of sage Shamik, comes to know that the king has despised his father, he curses the king in which he will die after 7 days due to the bite of Takshak snake. Sage Shamik explains to his son Shringi that he has done a lot of wrong by cursing.

When King Parikshit returns to his palace and as he takes off the crown from his head, his mind is guilty of the crime committed by Kaliyuga. Sage Shamik follows them to his palace to meet the king, King Parikshit pays respect to sage Shamik. Sage Shamik appreciates him and tells him of the curse given by his son Shringi. Sage Shamik tells the king to meet his gurus to attain salvation. King Shamik goes to his guru and tells him about his curse and asks him the way to attain salvation for himself. So his Guru asks him to recite Shrimad Bhagwat. And send them to Lord Shukdev so that he can recite Shrimad Bhagwat from him. Going to Lord Shukdev, King Parikshit asks him the way of salvation, then Lord Shukdev listens to him Shrimad Bhagwat Katha in which he narrates the life Leela of Shri Krishna. He tells that Kansa, the prince of Mathura, used to punish all the sages and people and considered himself to be God. To get rid of the demons like Kansa, all the gods go to Brahma ji and ask for help. So Brahma ji tells them that the time has come to take the incarnation of Shri Hari. Shri Hari incarnation was also about to be taken from the womb of Kansa’s sister. On the other hand, Kansa was getting his cousin Devaki married to Vasudeva. After marriage, Kansa becomes the charioteer of Devaki and Vasudeva to leave them in their kingdom. Then on the way there is a Akashvani that Kansa will die only by the eighth son of Devaki. Hearing this, Kansa gets angry and tries to kill Devaki so that neither Devaki will remain nor his son will be born.

As Kansa proceeds to kill Devaki, Vasudev stops him. Vasudev takes a vow that he will automatically sleep all his sons to Kansa. Kansa keeps them with himself and imprisoned them in the palace itself. Maharaj Ugrasain frees Devaki Vasudev by Kansa. Kansa makes a policy to meet his two friends Banasur and Bhumasur. A plan is made to kill Kansa and his friend Maharaja Ugrasain. Akrura becomes suspicious of Kansa and prepares to be alert to any conspiracy by Kansa. With the news of Devaki conceiving for the first time, Vasudev’s brother sends the Lord’s Prasad. Kansa is slowly gathering the army of his friend kings. She gives birth to Devaki’s first son. Vasudeva goes to Kansa with his first son.

Seeing Devaki’s first son, Kansa sends him back because he is only in danger from Devaki’s eighth son. But Chanur, an advisor to Kansa, tells him to kill all the sons of Devaki. Kansa snatches his son from Devaki Vasudeva and kills his son. Then he locks them in effect. When King Ugrasain comes to know about this, he is furious by calling Kansa to him and orders Kansa to be taken prisoner. Kansa’s friend’s army reaches there and kills all the loyal soldiers of King Ugrasain. Kansa puts King Ugrasain into action. Kansa’s army spreads all over the kingdom and takes possession. Kansa captures the entire Mathura city. King Shurasen tells Akrur to run away. Akrura’s companions together take away all their companions from Magadha and send Vasudeva’s second wife Rohini to Nandaraya in Gokul.

Vasudev’s second wife Rohini, along with her soldiers, leaves the city in disguise. Rohini with Akrur walks towards Gokul and reaches Nandarai’s house. Kansa declares himself the king and tells a lie in the assembly that the king has gone away with sanyasa and has been made the king. Kansa is coronated. Ugrasain and his companions plan to drive away Devaki and Vasudev. Mitrasena goes to meet Devaki Vasudev as a cook and explains the plan to free him but Vasudev refuses to run away. Devaki’s second son takes birth, whom Kansa comes and kills.

Kansa goes on killing every son of Devaki. Shesh Naag requests Shri Hari to take birth with him this time but to take birth as elder brother and not younger brother. Shesh Naag ji takes the place of the seventh son in the womb of Devaki. As soon as Kansa comes to know about this, Kansa goes to Devaki Vasudev’s prison and tries to attack Devaki, he is blinded by Sheshnag. Kansa leaves from him. Kansa gets frightened by the snake and starts seeing snakes everywhere. Chanur advises Kansa to kill Devaki but Kansa refuses. Shri Hari Devi asks Mother Bhagwati to install Devaki’s seventh son in the womb of Rohini so that she can be born.

Goddess Mother Bhagwati takes out Shesh Nag from Devaki’s womb and puts it in Rohini’s womb so that Shesh Nag can be born. Devaki feels as if she has had an abortion, this news is given to Kansa. Devi Maa Bhagwati tells Yashod that Sheshnag should be installed in Rohini’s womb and advises her to perform a yajna to become a mother so that her lap can also become green. Yashoda wakes up Nandarai and tells everything. Yashoda informs Rohini of the birth of Devaki’s seventh son in her womb. Rohini feels very sad to be pregnant because how can she become a mother and how will people understand this. On this Nandarai takes him to his Kulguru Shandilaya so that he can understand the meaning of all these things. Guru Shandilaya tells them everything. Kansa tortures the people of the city.

Sri Hari is absorbed in Devaki’s womb as her eighth son. All the deities come to see this scene. The prison is decorated with flowers, seeing which the soldiers are astonished and take all the flowers in front of Kansa. Hearing this, Kansa doubles the guard in the prison. Sri Hari Maa asks Goddess Bhagwati to take birth from Yashoda’s womb. Yashoda’s baby shower is done. Kansa starts feeling fear inside and Vishnu starts seeing him everywhere.

Kansa sends Devaki to Chanur to see if she has signs of Vishnu in her eighth son or else she tells Kansa to come to Chanur and tell her that she looks normal. Chanur then asks Kansa to kill Devaki but Kansa refuses at that time. Rohini gives birth to Balarama. Kansa starts getting confused and starts seeing Lord Vishnu everywhere, due to which he gets terrified and starts challenging Lord Vishnu. Vishnu narrates to Lord Narada the penance and life story of the previous births of Devaki and Vasudeva. Shri Krishna is born and Mother Bhagwati wakes Vasudev and asks him to take Shri Krishna to Gokul so that she can bring Nandaraya’s daughter from him and leave Krishna behind. Vasudev walks with Shri Krishna, it rains heavily on the way. Vasudev crosses the Yamuna river carrying them in a basket.

Yamuna ji, the pat queen of Lord Shri Krishna, says that Shri Krishna will not let go without her feet. On which Shri Krishna chooses his feet. Vasudeva reaches Nandaraya’s house and leaves Krishna there and returns with Yashoda’s daughter. As soon as the morning dawns, the soldiers reach there with the sound of crying and inform Kansa about the daughter instead of the birth of Devaki’s eighth son. Kansa, hearing this, reaches there and starts interrogating them. Kansa snatches the daughter from Devaki and tries to kill her. Mother Bhagwati comes in her real form and tells Kansa that her death has been born, which leaves Kansa fuming. The birthday of Shri Krishna is celebrated in the house of Yashoda Nandaraya. Kansa releases Devaki and Vasudev.