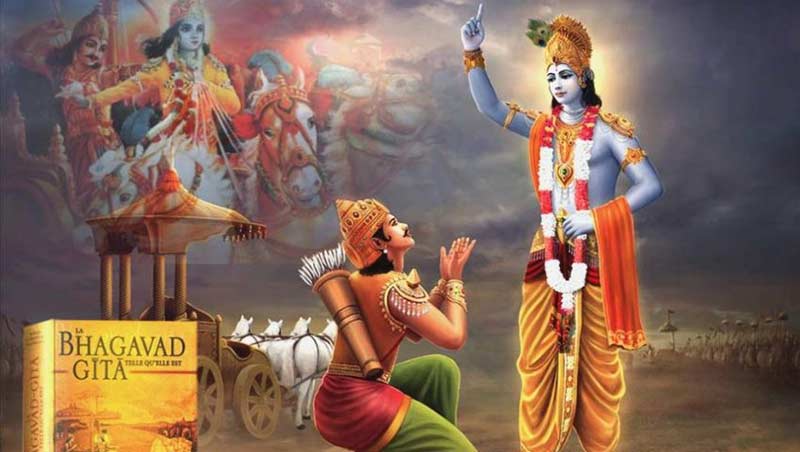 The Shrimad Bhagavad Gita ‘The Song by God’ often referred to as the Gita , is a 700-verse Hindu scripture that is part of the epic Mahabharata (chapters 23–40 of book 6 of the Mahabharata called the Bhishma Parva), dated to the second half of the first millennium BCE and is typical of the Hindu synthesis. It is considered to be one of the holy scriptures for Hinduism.

Religious texts have taught humanity the right direction and way of life for centuries. Whatever religion we follow, we move forward on the ideals of that religion, we get these ideals through religious texts. We have been following these ideals from generation to generation. We provide you the facility to download all religious texts in Hindi respecting all these religions.

The Gita is set in a narrative framework of a dialogue between the Pandava prince Arjuna and his guide and charioteer Krishna. At the beginning of the Dharma Yuddha (religious war) between the Pandavas and the Kauravas, Arjuna is filled with moral dilemma and despair about the violence and death in the war against his own relatives. Krishna-Arjuna dialogues cover a wide range of spiritual topics, touching on moral dilemmas and philosophical issues that go far beyond Arjuna’s war.

Shrimad Bhagavad Gita is a great Hindu text in which Mahabharata is described. Bhagvad Gita is a mysterious book in which the essence of all Vedas and life has been given, whoever reads the Gita with a clear mind and meditation, all his sorrows, sorrows, Lord Shri Krishna takes away the fears, worries, the person who always reads the Bhagavad Gita and imbibes the things mentioned in it in his life, all the sins committed in his previous birth and in this life are washed away by bathing with water. The filth of this body is cleaned, but a bath with nectar water in the form of Gita also destroys the scum of the soul. One becomes free from bondage i.e. attains salvation.

The Bhagavad Gita presents a synthesis of Hindu ideas about Dharma, theistic devotion and the yogic ideals of salvation. The text covers Jnana, Bhakti, Karma and Raja Yoga (spoken in the 6th chapter), incorporating ideas from the Samkhya-Yoga philosophy. The Bhagavad Gita is the best known and best known of the Hindu texts, having a unique pan-Hindu influence.